'What cannot be expressed by any other means...'

In the 1961 book The Theatre of the Absurd, Hungarian dramatist and scholar Martin Esslin coined the eponymous term as a device to begin discussion about an important development in the contemporary theater. A development so important that he felt it necessary to define a group of work by authors whose plays shared similar characteristics and were making significant contributions to the discussion about the present situation of Western man. The Theatre of the Absurd was his elucidation on this new movement, which he felt had the potential to provide new ideas, new approaches, and a new vitalized philosophy to transform the modes of thought and the feeling of the public at large. He posited that theatre is the point at which deeper trends of changing thought first intersect with a larger public. Fifty years after Esslin’s book was published, the question is still routinely posed as to whether, and how, the works in this loosely defined group are weathering, and how they are providing modern audiences with an exciting and meaningful theatrical experience. The father of absurdism, Eugene Ionesco, best explains why, after all these years, the work still matters: “Theatre is simply what cannot be expressed by any other means; a complexity of movements and gestures that convey a vision of the world inexpressible in any other way.” ​
As Producing Artistic Director of the Idiopathic Ridiculopathy Consortium (IRC), Philadelphia’s Absurdist Theater Company, my charge is to select which existential anxieties—and by that I mean which plays—our audience and our company will wrestle with during the artistic season. And while existentialist plays share a general theme of characters confronting the purpose of being head on, it’s exciting to see how these plays also resonate with time-specific flavor and relevance, given current world events and politics.  ​

What is the purpose of our time here on earth?

Our heroes in the IRC’s current production of The Chairs contend with issues of aging, the boredom that comes from telling the same stories again and again, the sadness and loss that results from not having pursued the dreams commensurate with one’s talent, and the inability to share one’s special purpose with the world in a meaningful way. Add to that the universal fear of inordinate memory loss, the disappointment of unfulfilled expectations within ourselves and others, and the unalterable fact that we can’t define and control the life to come. What makes it all theatrical (and entertaining) is that we behave as though we can.

​In considering what stories the IRC will tell, an important question I ask is how a particular work will ignite the audience’s imagination to think and feel more deeply about where they are now; and how the day to day banalities of their lives can be informed; and, if you will, how the chop wood, carry water can be more meaningful, particularly in our over stimulated world. Unlike topical plays that rise and fade with the day’s events, absurdist works will resonate as long as existential anxiety remains. Given anxiety-related disorders are at an all-time high, and we struggle to answer what we are doing as a nation and a civilization in this political year, perhaps there is wisdom in asking the basic question of what is the purpose of our time here on earth.

Samuel Beckett challenges: “To find a form that accommodates the mess, that is the task of the artist now.” As an artistic director, I take Beckett’s charge to contemplate which plays will provide a beacon of meaningful light in a stormy social climate. And I don’t think the light is necessarily only defined by the conversation it sparks. Perhaps the silence it provokes is as meaningful. I would suggest that the authors of works from the Theatre of the Absurd provide a safe haven of contemplation and entertainment.

Beckett explored on stage the manifestation of the essence of the experience of being. As a performer, the way you tell the story is to be it, even if that story is simply about contemplation. This experience then transcends to the audience, much in the same way a dance or music performance can be infectious, resulting in an experience more powerful than the event itself. Unlike modern theatrical events in large venues where the audience is distanced from the action and the event, and in which the story follows a clear plot trajectory, and the actions and psychology follow a definable path, works from the Theatre of the Absurd often defy logic and behavior.

So the question is: can we ask the audience to simply exist in the same space with the characters who also grapple with existential anxiety themselves and then, does the experience become part of the production, a part of the total experience for the audience, and a space for self-examination for the performers? What transformations for all might result when we ask the audience to sit in contemplation for one hour, two hours with no plot development as distraction? What happens when the character’s experience of existential anxiety is the catalyst for the audience’s contemplation? Do the audience members, by proxy, become the tramps in Beckett’s Godot, waiting for the tidy ending that will never come?

No easy answers, but the solace of greater connection

This is how the work of absurdist authors is resonating with our company and with the audience members we speak to. So perhaps that’s the response to the question about how this work has weathered. Perhaps what appears under absurdism’s weathered exterior is a newly polished gem of wisdom in a non-traditional delivery form. As we struggle to find coherence in the incomprehensible, the plays from the Theatre of the Absurd provide observations and a good measure of laughs. In Beckett’s Endgame, Nell observes, while banished to a trashcan for her remaining days: “Nothing is funnier than unhappiness, I grant you that.” There’s a cathartic release when we accept the parameters of unknowing, the magnitude of freedom that exists when we release control about finding an answer to all the problems and attend to the daily struggles. The simple act of two people waiting for an unknown event and the silence between is so richly filled by many beautiful moments, and when strung together creates a beautiful work of art that may simply provide no easy answers, but the solace of greater connection and the respite from our constantly agitated minds. 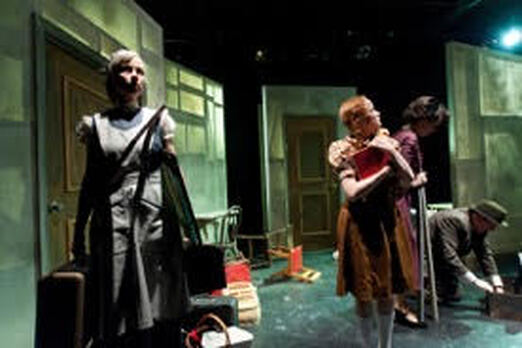 The IRC's 2010 production of “The Empire Builders” by Boris Vian. Photo: Johanna Austin.

Absurd is the new normal

Absurd is the new normal: tumultuous times compel us to ask what qualities define us as individuals, as communities, as a country, and what is the mark we are making and leaving on the world? These questions resonate as clearly and powerfully as they did in 1953 when Beckett’s famous tramps waited in a barren land under a fruitless tree for the mysterious benefactor that would never come. We’re running for cover from our over-stimulated, over-communicated, hyper-analyzed world. There’s something liberating in knowing that Godot is never going to come, and that providing a happy ending doesn’t bring meaning. There’s an interesting, important story for the audience and the performers within the silence.

​The time to sit in communion with others is a necessary luxury, allowing the anxieties that arise when the plot isn’t the main point, when we feel that experience wash over us, there is a powerful connection that grows out of the unspoken event that is created in tandem with the audience. ​ 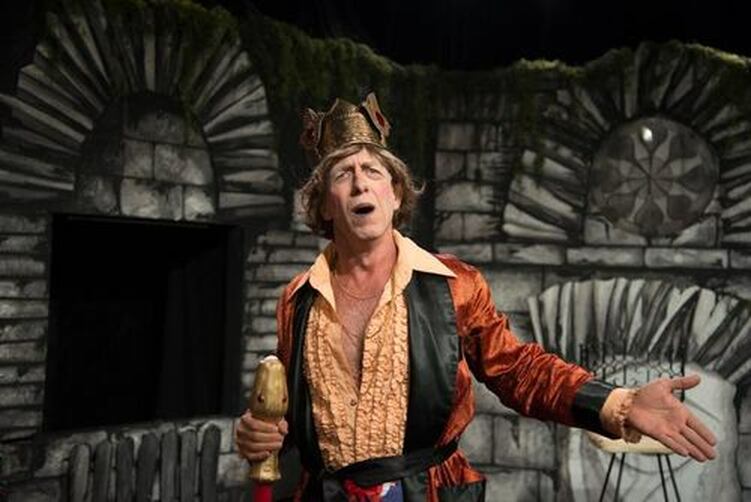 The IRC's 2015 production of “Exit the King,” by Eugene Ionesco. Photo: Johanna Austin.
As the IRC continues rehearsals for Eugene Ionesco’s The Chairs for FringeArts 2016, the process of directing and performing in this show is as ritualistic for the performer as for the character I’m portraying. The Old Woman, 94 years, has lived with her spouse for 75 years in a lighthouse surrounded by sea. Every evening they engage in games to keep themselves connected. When the Old Woman chides the Old Man for not becoming famous in life, “You could have been head president, head king, or even head doctor, or head general, if you had wanted to, if only you’d had a little ambition in life,” he responds, “What good would that have done us? We’d not have lived any better.”

Each time the other actors and I meet to consider this question in rehearsal, it occurs to us that we cannot consider our characters without that process impressing and informing ourselves—the choices we make as the characters and the choices I make as a director and performer inform the ways we move through the days between our rehearsals. The hope is when this play takes the stage on September 6 at The Walnut Street Theatre’s Studio 5, that the small audience of 53 each evening will be infused with the metaphysical musings and ponderings of the characters. We hope the performance of this classic work of absurdist theatre will prompt the audience to question and wonder like the characters and as the performers portraying them. Our hope is that the story the audience leaves with is not necessarily a story you can retell over coffee, more a series of moments that resonate in an affective experience that cannot be reproduced. Ionesco wrote: “Explanation separates us from astonishment, which is the only gateway to the incomprehensible.” ​ 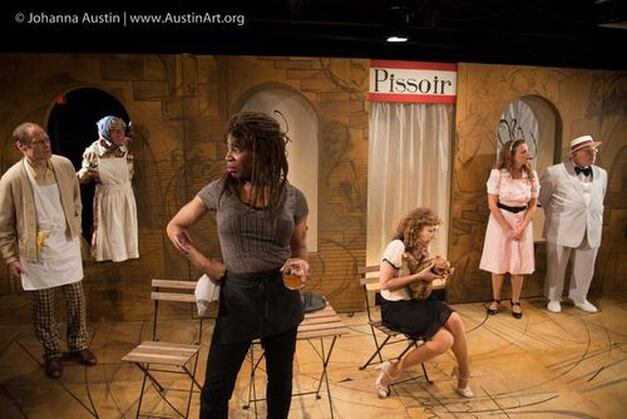 The IRC's 2014 production of “Rhinoceros,” by Eugene Ionesco. Photo: Johanna Austin.
There is a hearty, enthusiastic audience for the work the IRC presents: curious minds who have been moved by the plays of Eugene Ionesco and the beauty of solitude illustrated in the works of Samuel Beckett. We have reached the outer limits of man’s ability to surprise and shock us; we are now searching for the safe place in contemplation of what we can do to have an impact and feel some level of control in a world faced with complicated moral and ethical dilemmas with no easy answers, no quick fixes.

Perhaps the intention when these plays were authored was to awaken people from their numbness, from the sameness of the structure of the traditional theatrical forms of the day. What if the place this genre holds in 2016, ironically, is the power of communion through a form that we fill in with our own silence? The IRC believes the place of contemplation begins with the ritual of waiting in communion with others.
Editorial note: The Idiopathic Ridiculopathy Consortium is currently celebrating its 10th anniversary as a Philadelphia theatre company. The IRC's production of Eugene Ionesco's The Chairs will run from September 6-25, 2016, at the Walnut Street Theatre as part of the Philadelphia FringeArts Festival.