What a joy to participate in PASC ...

... and celebrate Philadelphia’s artistic vanguard! Through PASC, the James E. Brewton Foundation is offering opportunities for research, cataloguing, and detailed studies related to Jim Brewton’s life and work. I recently donated much of the Brewton ephemera to the University of Pennsylvania Libraries. Most of the artwork is stabilized and awaits cataloguing, assessment and conservation. There is still some detective work to be done—I’d estimate there are about 30 more pictures out there—and the artworks and ephemera offer many tangents to explore and connections to make. If you think you’d like to get involved, we’d be delighted.
​
In this blog entry, I’d like to present some background about Jim and how his art relates to important avant-garde movements in Philadelphia, the United States, and Europe. Then I’ll introduce one of his collectors, Bruce Broede, as a sample of my initial research efforts. First, a little bit about the Brewton Foundation and the work we’ve done so far. The James E. Brewton Foundation is a Pennsylvania-based 501(c)(3) nonprofit. We have two basic goals. First: find, conserve, and catalog the art. Second: work with educational and cultural institutions to preserve the work, and offer access to scholars and to curators for research and the works’ exhibition.
Jim was my father, an avant-garde painter and printmaker who died by his own hand in 1967. Our household in Philadelphia had very few of his pictures (my parents had broken up), and I grew up knowing little about his art. After two memorial shows in Philadelphia—in 1968 and 1971—his artwork was dispersed and the world forgot Jim. Thirty-seven years passed. On a February afternoon in 2008, I noticed an ad in an old copy of ARTNews. It was for Michael Taylor’s show at the Philadelphia Museum of Art, “Thomas Chimes: A Life in Pataphysics.”

​“Pataphysics” got my attention; I vaguely remembered Jim’s print, The Pataphysics Times (1964). I’d thought Jim was the only Philadelphia artist who admired Alfred Jarry, back in the day.

I sent a letter to Michael and was bowled over when he called me. He was interested in Jim’s work, and he encouraged me to start searching for individual pieces, “sooner rather than later.” The memories were painful, but I found more than a hundred astonishing artworks. The largest two troves were held by women named Patricia, a pataphysical non-coincidence that Jim would have enjoyed. I found many of his belongings, including art-making tools, sketchbooks, and notebooks. In 2012 we showed one of Jim’s pictures, a portrait of Edgar Allan Poe, at the Woodmere Museum in Chestnut Hill. In 2014, thanks to Michael Taylor and the organizers of Philadelphia à la Pataphysique, we showed nearly thirty works at Slought, taking the opportunity to have them cleaned and restored. Michael Taylor gave a talk about Jim. The audio is on the Slought website. Once in a while, I listen to it again…. 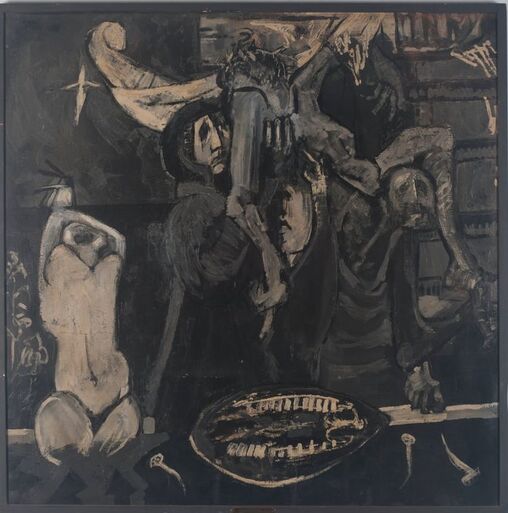 James E. Brewton. The Deposition, 1959, tempera on panel, private collection. Winner of the Philadelphia Water Color Prize in 1959. Photo by Elena Bouvier.
While at the Academy, Jim’s student job was at The Print Club (now Print Center), where he was electrified by the CoBrA artists’ work. Knowing how excited he was about CoBrA, Jim’s friend Claire Van Vliet introduced him to her friend Erik Nyholm, a close friend of Jorn. In 1962-63, and again in 1965, Jim spent time in Denmark with the Nyholms and Jorn. Back in Philadelphia, he continued to innovate, synergizing the concepts he admired with his own lyrical style. He called his method “Graffiti Pataphysic.”

In May 1967 Jim and Fluxus artist Jim McWilliams (also a friend of Claire’s) organized a pataphysics-inspired show at Perakis Gallery, but three days before the opening, Jim shot himself. During the years that followed, his works were scattered. I knew of fewer than twenty in 2008.

According to an old exhibition catalogue, Bruce and Carol Broede had lent some exciting-sounding pieces to a show, including Ubu’s Military Mind, X and An Egg Carton for the Wall. When I searched for the Broedes in 2009, I learned they’d moved from Philadelphia to the Los Angeles area and had a son, Jason. In memory of their friend, they gave Jason the middle name of Brewton. Since then, they had divorced, and Carol remarried. She has been extremely helpful and generous with her time.

“I do remember X,” she told me. “I believe the portion on the bottom was made from a cardboard type of box, similar to the egg carton, that had held forks, or some other silverware. It was truly a show-stopper." Carol helped me get in touch with Bruce. He’d had major surgery, but he talked with me a few times. Below are his recollections:
“Jim worked for me at the University of Pennsylvania book store," Bruce remembered. "The reason I got The Pataphysics Times was, I was able to order a display of paints, dozens of different tubes of paint. They were delivered to the store for display, and I gave them straight to Jim to take home. In return, he gave me a copy of The Pataphysics Times.
​
“I bought Last Game and No Birds in the Sky in the last year before his death," Bruce said. "Last Game: metal stuff was used as paint on the canvas, and then he rolled balls onto it. He left them where they fell—fifteen balls for the game of pool. The white X was the cue ball. The shadow of the pool player was from a famous photo of a shadow burned into a bridge [by a body] at Hiroshima.

“No Birds in the Sky was a metal sculpture with a Styrofoam bird up in it," Bruce continued, "gigantic, disguised as an airplane, dropping a bomb. Jim was fixated on Hiroshima. In 1990 I was going to live with my sister in Bismarck and had the two big paintings sent there. They were still in the shipping crates when I left. Now we’ve cut off all contact.

'He was so far ahead of his time'

From the Brewton Foundation

From the Brewton Foundation’s board of directors, and from me personally, we are delighted to offer Jim’s work and ephemera for study through PASC. If you’d like to participate, please email pascinitiative@gmail.com.

​I am profoundly grateful to Michael Taylor, who set the Brewton project in motion. For their enormous kindness, I wish to thank John Heon, Aaron Levy, David McKnight, Katie Price and Jean-Michel Rabaté. For more images of artwork and information about Jim, please visit www.jebrewton.org.