This is the title header of an essay about metafiction

BY MATT MADDEN     |     October 27, 2021
I want to talk about metafiction, which generally refers to a work that draws attention to and even directly comments on its own artificiality.

I embrace this term completely because I revel in the playfulness it represents. Now, a lot of readers and artists (probably the majority, to be honest) prefer a seamless experience where the author never intrudes, where the artifice of the form is subtle and never calls attention to itself. I appreciate plenty of art that is made following that "hidden hand" approach, but personally I'm happiest reading and making work where the artifice is exposed and self-aware.

One reason I favor an ironic, self-referential approach to comics is that I mistrust grand narratives  and the overly-neat allure of traditional storytelling. I feel that the Brechtian "Verfremdungseffekt"—breaking the fourth wall—and similar notions from the early 20th Century do challenge readers to adopt an ironic and critical stance to all art (and to media in general).

Another reason I love metafiction and self-referentiality? It's just so damn fun.

Ernie Bushmiller's "Nancy." You'll find lots of self-reflexive playfulness in newspaper strips and children's books.
Of course, metafiction goes in and out of style and I feel like it's at a bit of an ebb these days, at least in the worlds of literature and comics (one place you do find a lot of it is in kids' movies and animation and in the snarkier superhero movies—my 11-year-old recently asked me what "meta" means since he hears it so much in the schoolyard and on youtube).

Perhaps this is a gauge of its current status: I looked up a definition of metafiction online recently to confirm whether or not it's generally hyphenated and I came across this wonderfully back-handed editorial comment disguised as a sample sentence: 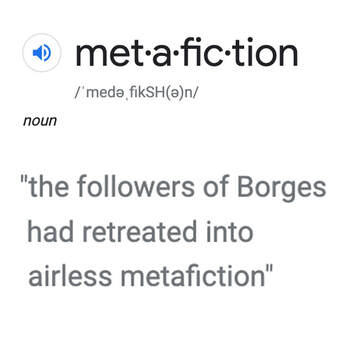 So, yes, there is a danger of falling into a trap of self-indulgent cleverness and navel-gazing, to be sure. An avowed Follower of Borges, I tried my best to avoid those pitfalls in Ex Libris but you'll have to judge for yourself whether I pulled it off or not!

I believe cleverness and a bit of preening has its place when handled well, as in the dazzling poetic experiments of Christian Bök's monovocalic poem-novel Eunoia or art spiegelman's regular commentary on the creation of Maus within the work itself. Craig Fischer and I talked about this subject a bit during our recent panel, "Playing with the Medium" at SPX. 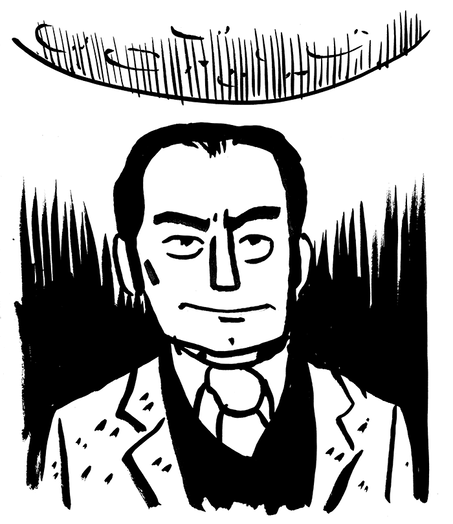 a sketch I drew of Italo Calvino a few years back
Ex Libris has a lot of direct influences and predecessors but if I were to point to one work that galvanized me into creating this little paper world it would have to be Italo Calvino's 1979 novel If on a Winter's Night a Traveler.
This novel addresses you, the reader, directly from the first page, informing you that you have just bought the new novel by Italo Calvino and only then do you read the "first" chapter (actually the second at this point), settling into a moody set-up for a tale of espionage in a gloomy train station.

But then… the chapter ends and that is the last you see of this story. Instead, the narrator returns and accompanies you back to the bookstore to complain about a defective book. Only it turns out the book you read wasn't the new Calvino. The bookseller gives you the correct book but when you sit down to read it you find that it's a different story and it, too, is blank after the first chapter!

I love the sheer inventiveness of this premise and the way it frames a heady investigation into the function of reading as a kind of romantic whodunnit/thriller. The various first chapters all create vivid fictional worlds (parodying, I later learned, popular styles of the day using a series of Oulipian constraints). The way Calvino creates a series of unfinished fragments of novels deeply intrigued me: it expresses a sense of the unbounded potential of art which feels especially relevant in this age of information overload—we can never read it all yet we each weave our own meta-masterpiece made up of the many scraps and threads that make it into our lives.
But metafiction is by no means limited to the post-modern literature of the 1970s!

Dylan Horrocks's Hicksville is a comic that informed Ex Libris and that has influenced me in many ways over the years. 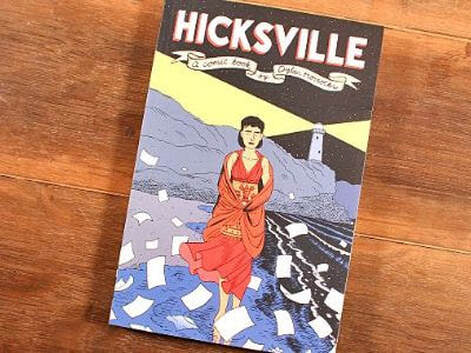 In fact, it's probably the book that got me hooked on inserting different drawing styles and different comic book worlds into a larger narrative. Hicksville tells the story of a comics journalist who travels to the eponymous town in New Zealand to learn about a famous, fictional superhero artist only to discover a town full of comics scholars and cartoonists, whose pages regularly interrupt the main narrative. 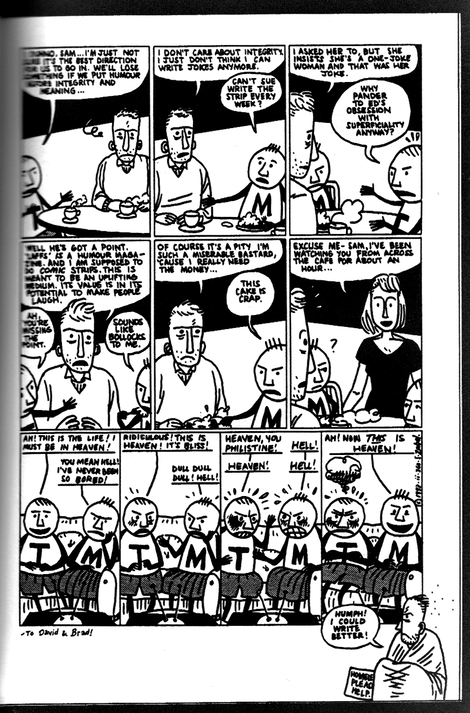 This page has several levels of metafictional self-reflexivity
In Hicksville, we see that one function of metafiction can be a kind of world-building. As Calvino did in If on a Winter's Night a Traveler, Horrocks introduces imaginary comic book pages as a commentary on the medium but also as a way to spark your imagination by suggesting the limitless potential of the imagination—an idea he makes concrete in the form of a special library which bears a certain resemblance to the mysterious bookshelf in Ex Libris (and if you read closely you'll even spot a little reference to it).

And by the way, Dylan's more recent book Sam Zabel and the Magic Pen is also excellent and can be read as a kind of companion volume to Ex Libris (there are even a few coincidentally similar imaginary comics in there!).

One thing I find problematic about the term "metafiction" and the buzz around it is that it tends to suck up a lot of air at the expense of other themes and formal approaches a work might exhibit. Ex Libris is also an homage to the history and potential of comics; a psychological thriller; and a meditation on our relationship to books and reading, among other things. That said, the self-referential aspects of the book certainly jump out at the reader (almost literally!) so I hope this short essay sheds some light on my use of metafiction in Ex Libris and why I continue to find it so appealing.
Related:
To receive updates from Matt Madden, subscribe to his newsletter.