BY JOHN HEON     |     March 4, 2018
John Heon: Much of your art is, in some respect, political, whether it’s dealing with gun violence, women’s rights, the Holocaust, junk-food advertising, or the US presidency. When did you start making political art and what prompted it?
​
Cheryl Harper: Even as a young child I recall my father would read the headlines aloud and react to them so it was always part of my consciousness. The Kennedy assassination took place when I was nine, and I became aware that being president could be a dangerous vocation. Even my early works incorporate political commentary but not in an overt manner. When I added ceramic sculpture to my media, it seemed perfect for political statements. However,  I’ve been making politically themed art since the early 1990s. 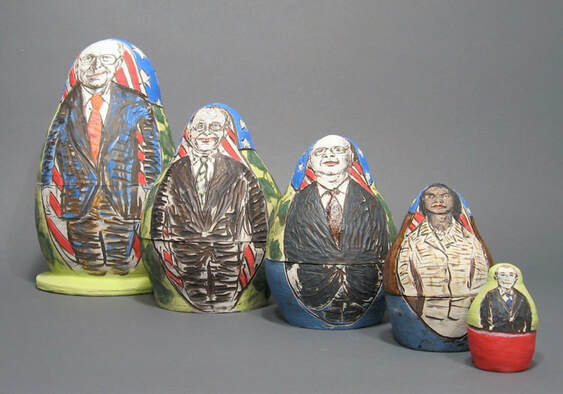 BaBUSHka Dolls by Cheryl Harper, 2006, ceramics, Cheney doll is 12" in height.
JH: Your more directly political pieces are often bitingly satirical, with multiple allusions to both political events and art history. They make the viewer laugh but also think, and you have a wonderfully bipartisan eye for hypocrisy and pomposity in politicians. Tell us about the evolution of this aesthetic mixture and the multiple levels of (art) historical and political meaning.

CH: My gallerist, James Oliver, likes to say that he thinks magic happens in my studio and has no idea how I do it. I tell him something general is coming and then something very specific with many layers of meaning occurs. I pour a number of ideas into the mix, and it evolves into its final version. I rarely do sketches or drawings of my ideas, but collect imagery and articles that interest me. I usually have a general concept such as political women as sphinxes. Art history is part of my toolbox, you could say. I take pictures of objects whenever I’m in a museum and may use them later as sources.
JH: I also see a certain folk element in your work. Are you playing with notions of “high” and “low” art? What do you think about Pop Art, and how has it influenced your work? How do these concerns relate to your choices of imagery, materials, and broader aesthetics?

CH: I can probably be seen as an outsider artist in my ceramic work. I never took any courses in clay or sculpture in my years of art school. I took a few short classes at a couple of art centers starting in 2004. Once I found a method that worked for me, I just made the work, teaching myself as I went along. I bought a used kiln that has since been rewired—a real commitment to the medium. So you won’t see any finesse of technique in my ceramic sculpture. As a result, I don’t get much recognition in the ceramic community, but it is seen as sculpture by the general art community.

​I grew up in the '60s and the works of the mostly male artists I saw in galleries and museums were working in what is now referred to as Pop Art. Warhol was everywhere (also self-taught in his eventual processes). However, once I began exploring clay as a medium of sculpture, it seemed the perfect vehicle for my political observations. Prior to that, I worked in printmaking, another very technical process but one that gave me a graphic sensibility in woodcut. I still like to use printmaking techniques in large works on paper and installations. 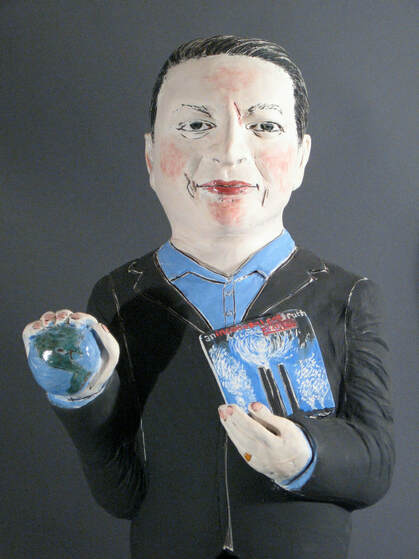 Cheryl Harper, The Teaching Gore (2008) ceramic, 32" in height
JH: Tell us about the Al Gore piece, its genesis, iconography, and reception.

CH: I admired Al Gore as vice president and saw him and Bill Clinton as a dream team, including their wives, promoted as partners. Bill was good (until the Lewinsky scandal), but it was Al who seemed to be the ideal candidate that would move America towards new ideas with dignity. When he lost by a hanging chad, I was in awe at how he reinvented himself as an environmentalist. He became an inspirational speaker, and I thought of the teaching Christ figure. Following the metaphor, Al Gore holds the earth (like Christ’s orb) in one hand and his DVD (instead of a book) in the other. The traditional medieval teaching Christ stands on Satan and the Antichrist, in this case George W. Bush and Dick Cheney. On the back, I have the story of Al Gore. The text also serves as documentation.
​
The work was well received and appeared in many reviews and on the cover of an art newspaper—I wasn’t even informed it was going to be there. A friend and I were at a restaurant and she said, "Isn’t that your work on the cover?" It won first prize in sculpture in the Pennsylvania "Art of the State" competition in 2008. The Republican politicians who attended the Harrisburg reception kept circling a couple of my political works, somewhat dumbfounded to see them there. When I saw that the juror who would choose the prizes was an art historian, I felt pretty confident that she’d find the piece interesting. 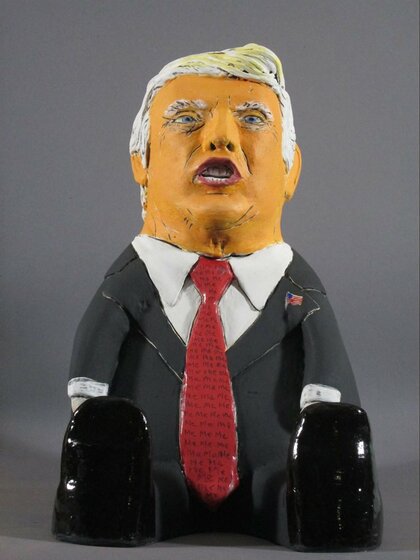 Cheryl Harper's Trumpty Dumpty: Mini Me (2017), ceramic sculpture, 21" h.
JH: How has your curatorial practice influenced your work as an artist and vice versa?

CH: Yes, absolutely one influences the other.  As an artist–curator, I find my curatorial projects are a creative act, as much as making my own work. I curated a major show of Pop Art, A Happening Place in Philadelphia, and became very close to the history and objects. When I began making ceramic sculpture, it was in my mind. Because my work has a graphic quality and I wanted to delve in deeper into learning about other artists that had the sensibility, I organized a show at Rutgers-Camden inspired by the graphic novel, Compulsive Narratives: Stories that MUST Be Told. What I learned from doing the show is that all the artists used their narrative skills because they would go nuts if they didn’t. There usually was a compelling incident such as having Jeffrey Dahmer as a classmate or a bad parent that almost killed them. They couldn’t move on until they told the story. I think all of the work in that show, no matter the medium, was often tragically autobiographical, but read as entertainment. 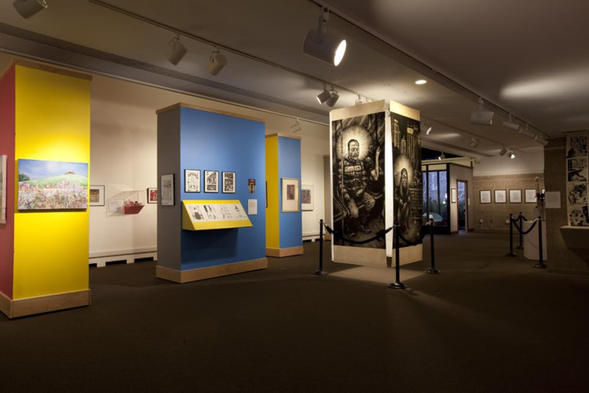 'Compulsive Narratives: Stories that MUST Be Told,' exhibition curated by Cheryl Harper for Rutgers University-Camden, 2014.
JH: What kinds of reactions, both positive and negative, have you received for your political pieces?
​
CH: It has generally been positive. My political works have been included in many competitive juried shows and have often won prizes. The press has been very attentive until recently.

​JH: Have you ever been censored or blacklisted because of the political content of your work? Or have you felt pressured not to create it or show it?

CH: It is only during the Trump presidency that I have felt uncomfortable in showing political work. I have been making satires for years and never felt it wouldn’t be appreciated. As you’ve observed, I am an equal-opportunity offending caricaturist. I never felt someone might come after me, but in our current online culture, I think I could be attacked. I wonder why these works aren’t being selected to be in shows or received critic’s attention as they would most certainly have been under other administrations. I sense the caution of jurors, critics, museums, and galleries to show work about the current administration. However, my gallerist, James Oliver, continues to be very enthusiastic in showing my work. I recently tried to post an image of my political commentary piece, Sitting Ducks, about the Aurora, Colorado, shooting on LinkedIn and it was tagged by an algorithm as inappropriate—a new form of censorship. 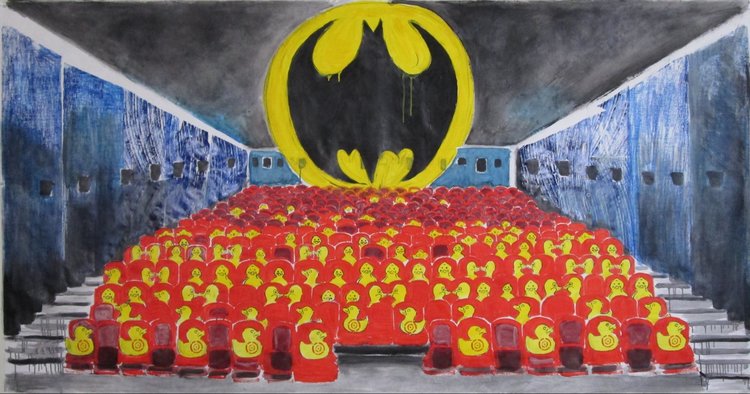