RE: ACT
An Interactive Art-Making Event 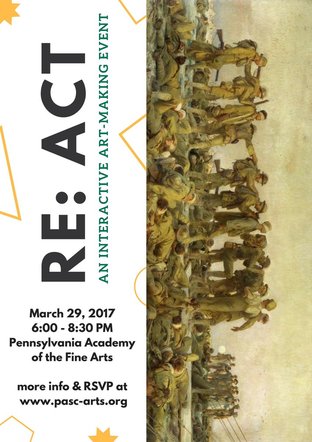 Since its opening in November 2016, PAFA's critically acclaimed exhibition, "World War I and American Art," impressed viewers with its power, depth, and scope. It not only presented outstanding examples of works by a wide spectrum of U.S. artists, but also provided unique historical materials, ranging from propaganda posters to newsreels, letters, and ephemera, that created a context for grasping the enormity of WWI and its impact on the nation.

Building on the theme of its 2016 symposium, “RE: ACTIONS,” which examined how avant-garde groups have generated work in reaction to various social, political, and aesthetic situations, PASC joined with PAFA to invite participants to RE: ACT to "World War I and American Art." By "RE: ACT," we meant to create concrete aesthetic responses to the artworks in the exhibition, using collage, drawing, photography, text, music, or video. We wanted to offer an opportunity for 21st-century makers in all media and at all skill levels to explore the experiences and conceptions of war from the early 20th century to the present. PASC-affiliated artists, poets, and scholars were on hand, joining participants' discussions of artistic/historical contexts and the creative process.

After walking through the exhibition, the RE: ACT group headed to PAFA's Sculpture Study Center, where work spaces and art supplies were provided, courtesy of PAFA. Participants were welcome to bring their own materials, too--although PAFA staff retained the right to prohibit any supplies unsafe to use in the museum (for instance, paints had to be water-based). We're posting some of the new works here; copyright is retained by the individual artists.

RSVPs included free admission to the exhibition, art supplies, beverages, and hors d’oeuvres. There was no fee for RE: ACT, but a donation to PASC (a Pennsylvania nonprofit) was suggested. A creative evening was had by all.